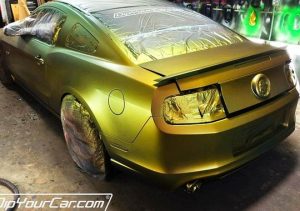 Robert Haasl drove his samples to Chicago and waited in lobbies for a chance to tell the likes of Ace Hardware and Sears that Americans needed a do-it-yourself can of plastic goop to dip the handles of their wrenches and garden tools.It was hand to mouth for a number of years,” says Scott Haasl. “Struggle, struggle, struggle.

Robert Haasl died in 1998, too soon to see rabid shoppers emptying store shelves of every can of Plasti Dip they could grab.It wasn’t their hand tools they were “dipping,” but their cars. Honestly it’s been a bit of a blur,” laughs Scott Haasl, now the CEO of Plasti Dip.

Social media and sites like www.DipYourCar.com,have helped sales of Plasti Dip skyrocket to more than a million cans a month.
Haasl doesn’t know who put the first video on YouTube of his product being sprayed on an automobile, but he started paying attention when sales of Plasti Dip spray cans began doubling and tripling, one month to the next.

Shoppers were no longer going to hardware stores looking for one can, “It’s go in, grab all 12 or 24 cans of black, push ’em into your cart, and go out the door as fast as you can because the next store doesn’t have it, they’re sold out,” Haasl says.

Before the Plasti Dip explosion, Haasl was selling 20,000 spray cans a month. Soon he was pushing a million.
I was busy hanging on for dear life,” Haasl says.

Car buffs had discovered something that had never occurred to Haasl’s dad.

Not only could they use Plasti Dip to change the color of their vehicles, if they tired of one color, they could peel it off and apply another.

No one saw the potential like Joe Plesher, a “car guy” from Florida intent on painting his wheels black, when he grabbed a can of Plasti Dip his brother had left in his garage.

“My jaw just dropped to the floor,” Plesher says. “I went to every single store in a 15-mile radius and bought every single can.”

The more Plesher experimented, the more excited he became. “I went on a 75-hour binge, not eating or sleeping.”
Within days, Plesher presented a business model to Plasti Dip, became a distributor and launched his website DipYourCar.com. Then he quit his insurance job to run his company full-time.

Hosting do-it-yourself videos as “Fonzie” – his nickname – Plesher showed how easily an array of Plasti Dip colors could be applied and removed.
Three and a half years after shooting his first video, Plesher’s posts on YouTube are nearing a combined 60 million views.
His 40 employees now fill orders out of a 45,000 square foot warehouse in Pompano Beach, a boon for Plesher and Haasl alike.

“Our greatest advertising has always been word of mouth,” Haasl says. “It’s just how word of mouth evolved.”
Asked what his father would make of it all, Scott Haasl smiles. “I think he’d be a little set back – what?”

Robert Haasl didn’t realize as he waited in those lobbies with his Plasti Dip samples, the entire time he was sitting on a gold mine idea.
Read more: ‘Dip’ happens: little-known product becomes sensation
Plastidip Ireland – Now you can buy a great range of Plastidip products in Ireland at iplastidip – Authorised distributor for Plasti Dip Ireland