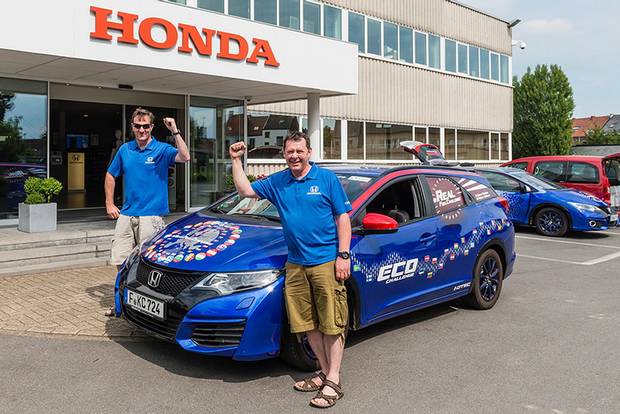 Two amateur drivers spent 25 days behind the wheel of the Honda Civic Tourer 1.6 i-DTEC, which recorded an average of 100.31 miles per gallon.

Fergal McGrath and Julian Warren stopped a total of nine times to refuel during their journey, which equalled the distance of driving from the UK to Australia.

The car, which was a standard model without any modifications, achieved an average of 932 miles on each tank of diesel, a fuel cost of £459 in average UK prices.

Mr McGrath and Mr Warren, both members of Honda’s European research and development team, set off from Aalst in Belgium on June 1 to navigate the continent in a clockwise direction.

They returned to the start point on June 25 having exceeded the Tourer’s quoted efficiency – 74.3mpg – by more than 25%.

The drivers were presented with the Guinness World Records title for “lowest fuel consumption – all 24 contiguous EU countries (all cars)” at Honda in Swindon, Wiltshire.