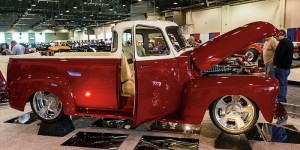 Alloway-built car won the 2015 America’s Most Beautiful Roadster (AMBR) award at the recent Grand National Roadster Show (GNRS) held Jan. 23-25 at the Pomona Fairplex in Pomona, Calif. The 1933 roadster, owned by Larry Olson of Sioux Falls, S.D., was finished by Alloway and drew approval from the show judges and the crowd alike. The AMBR, an eight-foot tall trophy, is awarded annually and is regarded as the ultimate recognition of a roadster-style hot rod. It was Alloway’s second time winning the award; his first was in 2003. Alloway also won Best Rod of the GNRS this year with the ’37 Chevrolet coupe that was in the top 10 in the Builder’s Challenge at SEMA this past November.

The GNRS started in 1950 and is the longest running indoor car show in the world. This year, 18 competitors vied for the AMBR. Alloway’s award-winning entry featured his signature black finish embellished with contrasting blazing orange flames running nearly the entire length of the roadster’s body. Alloway uses PPG products exclusively, and this showpiece was no exception. He achieved the car’s look with PPG’s DELTRON DBU 9700 Basecoat and DCU 2002 CONCEPT Clearcoat.

Alloway, renowned as “the master of black” because his distinctive cars are almost always painted black, has been building street rods since 1978. His shop, Alloway’s Hot Rod Shop in Louisville, Tenn., opened in 1991 and has consistently turned out a stream of award-winning vehicles. He is well known for cars that feature a commanding, aggressive look obtained through a combination of color, proportion, stance and pure power.

Along with winning the AMBR and Best Rod honors, Alloway was inducted into the GNRS Roadster Hall of Fame during the show. The Hall of Fame was established in 1960 to elect “outstanding pioneers in the creative car-building sport.” Alloway’s entry into the respected body was based on his illustrious career, building cars that have received significant awards. In addition to his two AMBRs, his cars have won the Goodguys’ Street Rod and Street Machine of the Year, the highly-prized Ridler trophy and others. He has also been welcomed into the National Rod & Custom Car Hall of Fame and honored as Detroit Autorama Builder of the Year.