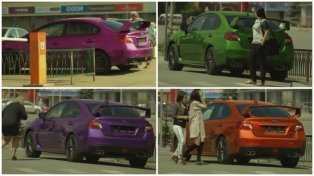 Ever wished you could change the color of your car really easily? Of course you did, since it gets boring after a while, but even wrapping takes time and money. This video featuring the Subaru WRX STI, which may actually be a commercial or viral ad from Russia, suggests it’s possible.

Apparently, the STI sedan is coated in something called Paramagnetic paint that changes color when electricity is passed through it. A couple of pranksters hide nearby and scare passers by. Some of them drop whatever they are holding, others get scared and run.

As funny as the video is, we think it’s fake. The supposed victims are actually actors and some of them ham it up too much. And of course, there’s no such thing as “Paramagnetic” paint, otherwise all the car companies would offer it.

So how is it done then? Let’s debunk the myth by showing you another video where an LAN cable changes from purple to teal. It’s done using a piece of software called Adobe After Effects that comes with a “Change To Color” effect. We use a similar setup to change the colors on our renderings sometimes.

That’s the bad news, the good news being that there are some nuances that change color. The most common is a paintjob that goes from purple to green.

TVR used it for production cars and you can easily buy it aftermarket. Some companies have developed color flip vinyl wraps and “plasti-dip” That sprays on but can be removed. The other option is a type of paint that goes black when it comes in contact with heat. We’ve seen it on lots of toys and a group of car enthusiasts applied it to this Nissan Skyline. We assure you that it’s not fake!

See the video and read the full article via Subaru “Paramagnetic” Color Change Prank Is Funny but Fake – Video – autoevolution.