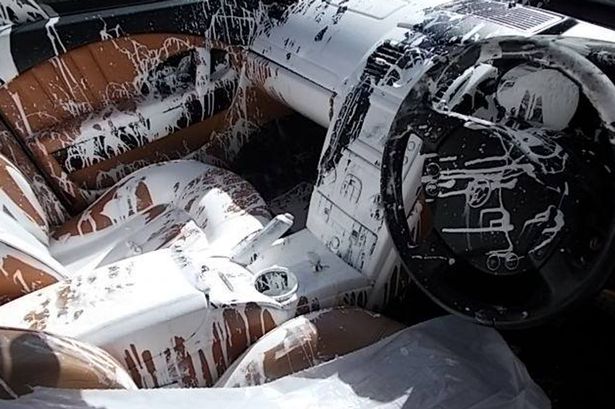 The thick white paint completely destroyed the interior of the driver’s supercar, causing more than £40,000 worth of damage

The interior of the sports car covered in paintImagine the pain this petrol head is feeling! Note to self, don’t leave a tin of paint on the backseat of your Maserati then swerve to avoid a dog…

The thick white paint completely destroyed the interior of the driver’s supercar, causing more than £40,000 worth of damage, as he was forced to avoid hitting the animal.

Claims Manager for RAA Insurance Hayley Cain said the driver had left the paint on the backseat when the lid dislodged from the tin and flew through the air.

She said: “As the tin flew around the car like a mini tornado, the leather interior and windscreen were liberally splashed with a thick coat of white paint.”Fortunately the driver was fine, but given the extent of damage to the interior, our insurance assessors declared it a write off and we settled the claim for over $90,000.

‘She said the Maserati paint storm, which happened in Australia, was definitely one of the company’s more unusual claims but the insurer has definitiely been met with some bizarre cases such as rats chewing through wire of a Land Cruiser.

Other insurance disasters included a Mercedes Benz being written off after a coat hanger was lodged in the convertible roof mechanism, a parrot eating a door trim and a dog trashing the interior.

Source: Maserati ‘written off’ after tin of paint splashes over plush interior when driver swerved to avoid dog – Mirror Online